Spot volume recovers most of its Memorial Day-related losses

Total spot load postings in the Truckstop.com system jumped 13.7% during the week ended June 11 (week 23), but a sharp rebound was inevitable as the prior week’s volume had plunged due to the Memorial Day holiday. However, volume remains nearly 5% below week 21, which was the week prior to the holiday. Total spot rates excluding fuel surcharges declined less than 1 cent. Total truck postings rose more sharply than loads, and the ratio of loads to trucks in the system declined.

The market’s failure to recover all the volume lost due to Memorial Day could be a sign that the market finally is beginning to stabilize. Volume had declined since the week 18 record, which had been spurred by the annual International Roadcheck inspection event. However, volume held nearly flat in week 19, and the 10% decline in week 20 represented a return to pre-Roadcheck volume. Given that week 22 had included Memorial Day, we have had only a single week – week 21 – during which volume declined without a clear explanation.

International Roadcheck also has disrupted seasonal expectations for week 23. Until last year, Roadcheck had usually occurred during week 23, so the volume surge in week 18 this year traditionally had occurred in week 23 instead. Therefore, it could take a few weeks to understand how the market is moving relative to true seasonal expectations. Of course, spot market seasonality in general has been greatly disrupted by the pandemic’s unique contraction and recovery dynamic.

Load volume in week 23 was about 139% above the same 2020 week and about 122% above the five-year average (2015-2019). Truck postings jumped 24%, which is a far larger increase than the scope of the decrease (11.7%) experienced during Memorial Day week, and truck availability was the highest in seven weeks. The Market Demand Index – the ratio of loads to trucks in the Truckstop.com system – declined to its lowest level in nine weeks. 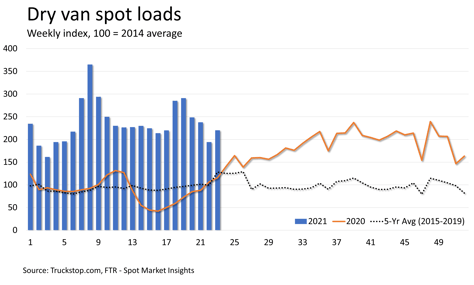 Dry van load postings rose 13.3% following the 18.3% drop during Memorial Day week. Volume was more than 7% lower than it was during the week before Memorial Day. Dry van load postings were about 90% higher than the same 2020 week and about 72% above the five-year average. Dry van truck postings rose 9.5% after the decline of nearly 11% in week 22, and the dry van MDI increased slightly as volume rose more than did capacity. 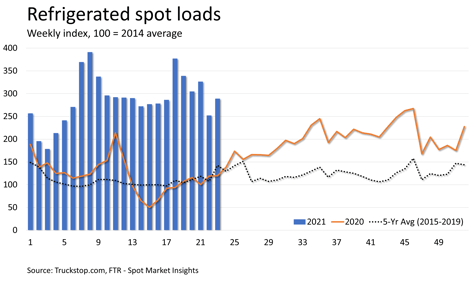 Flatbed load postings rose 14% after falling 14.6% during Memorial Day week. Volume was less than 3% below that during the week before Memorial Day. Flatbed load postings were about 175% higher than the same week last year and about 158% above the five-year average. Flatbed truck postings surged 36.3% – much more than offsetting the 9.8% decline in week 22 – for the largest gain since the first week of 2021. The flatbed MDI was the lowest in nine weeks. 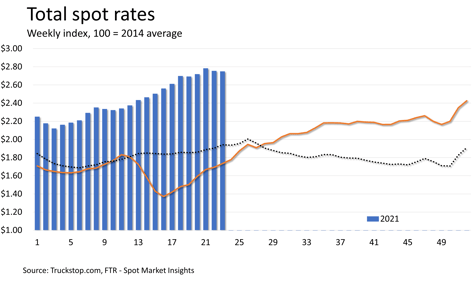 The broker-posted rate per mile excluding fuel surcharges declined less than a penny. Although the decrease was very small, weeks 22 and 23 saw the first back-to-back rate declines since weeks 9 and 10 as the market was settling from February’s weather-induced surge. Spot rates were about 59% higher than the same 2020 week. Although dry van and refrigerated rates fell, flatbed rates rose nearly 2 cents, narrowly edging out week 21 for a record. Flatbed rates were nearly 62% above the same 2020 week. Dry van fell more than 6 cents and were about 53% above the same week last year. Refrigerated rates fell nearly 12 cents and were about 49% higher than the same 2020 week.

Our clients come from the shipping, trucking, rail, intermodal, equipment, and financial communities.