Spot market load volumes during the week ended May 29 (week 21) declined week over week for the first time since bottoming out in mid-April, but volumes apparently were disrupted by the Memorial Day holiday. Total load availability in the Truckstop.com system was down 1.8%, principally due to a double-digit decline in refrigerated loads and a smaller decline in flatbed. A decline in truck availability in all three key segments and rate increases for dry van and flatbed are further evidence of the holiday impact.

Total load availability was about 18% below the five-year average for week 21 and about 11% below the same 2019 week. The year-over-year comparisons are about to get much tougher, however. Traditionally, the Commercial Vehicle Safety Alliance’s International Roadcheck event, which has always put considerable upward pressure on the spot market, has been held in week 22 or week 23. This year, it would have been held in early May instead, but it was cancelled altogether. June in general is the spot market’s peak month in all segments, so it will be difficult for volumes to continue to close the gap with prior-year levels even as the U.S. economy continues to emerge from lockdown.

Dry van volumes were up 3.5% from the prior week after four straight weeks of double-digit growth. Volumes have more than doubled since bottoming out in week 16. The strongest growth in dry van was in the South Central region, followed by the Northeast and Midwest. Loads were down in the Mountain Central and Southeast region. Dry van loads are 13% below the five-year average for week 21 and about 4% below the same 2019 week. 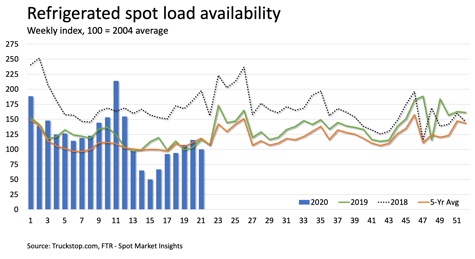 Refrigerated was the big drag on volumes among the three key segments during week 21 as load availability fell 13.4% from the prior week, but refrigerated load availability is still double what it was when it bottomed out in week 15. Load volumes fell 35% in the Southeast region and were down by a smaller percentage in all regions except the Northeast, where refrigerated volume was up less than 1%. After running above prior-year comparisons for a couple of weeks, refrigerated volumes are about 15% below the five-year average and about 14% below last year. 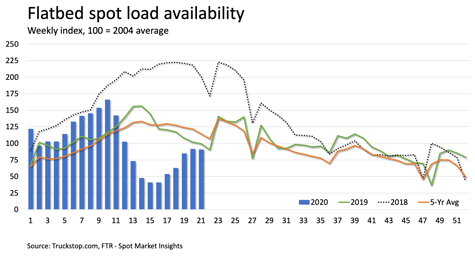 Flatbed volumes were down 1.1% in week 21 from the prior week for the first decline since week 15. Flatbed load availability has seen the strongest rebound from bottom at 120% growth since week 15, but flatbed also had taken the biggest hit. Load availability was up around 4% in the Midwest and West Coast regions, but volume was down nearly 12% in the South Central region. The Southeast was up slightly while the Mountain Central and Northeast were down. Flatbed loads are about 21% below the five-year average for week 21 and about 9% the same 2019 week.

For a more granular look at the load volume recovery in total truck and the individual segments, see the COVID-19 Truck Freight Recovery Index, which also is based on Truckstop.com spot load volume data, at www.ftrintel.com/coronavirus.

Increase Your Freight Knowledge with State of Freight Today

Content that you rely on to make sense of rapidly evolving transportation markets. Industry leading forecasts to keep you ahead of the competition. That's why FTR is the most respected name in transportation intelligence. Enter your email to join FTR's State of Freight TODAY newsletter. This monthly update is the easiest way to remain informed on issues facing the transportation industry.

FTR is the industry's source for Transportation Intelligence. FTR has served the shipping, trucking, rail, intermodal, equipment, and financial communities for more than thirty years.